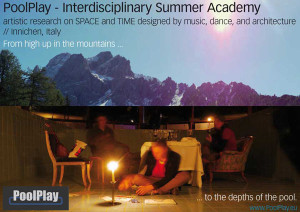 Here you may apply to our summer academy by sending a simple email stating your interest in participation. You will receive more detailed information via email and you have one week to confirm your application.
We hope you have found our general information PDF already. 🙂 If you have any questions, just drop us a line at PoolPlay (at) ar2com.de

2017 PoolPlay will take place from the 28th of August – 2nd of September. Interested? Send us an email: PoolPlay (at) ar2com.de stating why you would like to participate and what is your background (maybe dance, maybe architecture, maybe philosophy or pure curiosity)